The 501st News Team recently got to talk to Corporal Boozy, Squad Leader for 4-4, and his outstanding accomplishment in achieving the Bronze Crescent Award. He describes in detail how himself and his squad accomplished a push with almost impossible odds.

The Bronze Crescent award is an award that represents great courage and acts of valour, to earn this award shows this has been achieved and that the receiver is a great member. The beginning of the slightly higher awards, earned only for meritorious acts during combat.

It was the 2nd operation against The Hand on Geonosis. 4th platoon had been tasked with taking POI Stinger, an AA Base which was preventing friendly Air Support to the Northern AO. 4-4 had pushed up to Phaseline Mythril. There, they began taking heavy fire from enemy infantry and were taking CAS strikes from incoming vultures. The squad had suffered heavy casualties, leaving them with only 1 trooper left combat ready. Supplies were running low, going from yellow to red on ammo and medical.

Sergeant Major Coward, who had been next to 4-4 at the time, gave the order for the rest of 4th platoon to push forward with the exception of 4-4 so that they could recover their losses. Corporal Boozy noticed that the assault was being pushed back and the other squads were sustaining losses. Acknowledging that the reinserting of his men would take too long, he rallied what little he had and began to support in the assault.

As Corporal Boozy and Trooper Craz, the only trooper that was able to proceed with combat at the time, pushed forward through the enemy, supporting the rest of 4th platoon. As they continued to move through enemy forces, they were met with a Geonosian platoon. Despite being dealt a losing “Hand,” Corporal Boozy threw down a squad shield and proceeded to eliminate the platoon with the assistance of Trooper Craz. Fire and Hell erupted as the shots flew through the air as the two squadmates elimnated the platoon of CIS forces. 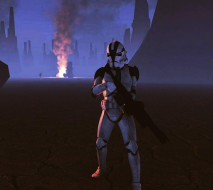 As the hardened troopers continued to push forward, they were met by Medical Trooper Beast and RTO Buggs. The pair took advantage of the situation and followed them into the fire. The four troopers presented a far too juicy opportunity for red air, and a vulture strike instantly vaporized Trooper Craz.

The position Corporal Boozy and the others established allowed the rest of the platoon to push up and establish their own fortifications.  Reinserts then arrived, bringing the Corporal’s squad back in the action. 4-4 then wasted no time and took quick advantage of the moment, capturing POI Stinger and claiming it under Republic Control.

In the end, Corporal Boozy’s heroism and level-headed leadership gave 4th platoon the assistance that such small numbers needed to overcome impossible odds.

Corporal Boozy was later nominated and received the Bronze Crescent award for courage, commitment and leadership that helped push The Hand back and led to a 501st victory.

He later goes on to say “It feels as a great honor to have, and I hope I am but the first to receive such and award. I hope it can be an example for other troopers and leaders in our unit that sometimes taking a risk can be worthy when that said risk is part of the order you are meant to follow, not every time you are gonna be able to move at 100% and not every time you are contribution will be as significant with lower numbers, but by contributing at least a little bit of what you are able to, can make the difference it what could be the key factory of your unit’s victory.

Corporal Boozy hopes to continue inspiring others and working the best he can as 4-4’s Squad Lead.