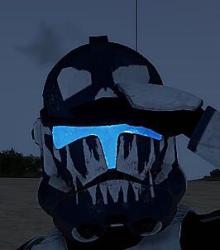 The Road To Battalion: CS-M VERAX

The Road To Battalion: CS-M VERAX

The Legions’ very own News Team takes an inside-look into the Battalion NCOIC Verax. Join us as we go delving into the Sergeant Major’s past!

Like all the troopers throughout the Legion, we all have a story to tell and a place to start and the Sergeant Major is no exception. First taking to the ranks of the 501st in the March of 2018, our then CR Verax entered BCT with determination, and with the help of the rest of his class, passed The Final Test. He enrolled in one of the first CTC classes, learning more in depth how the 501st Legion operates on the field. With time, he would attain his blues and become a trooper of the 501st, joining the ranks of the Airborne troopers almost immediately afterwards.

By June of 2018 Verax had become the first Corporal, through meritorious promotions, to obtain the Platoon Sargeant Billet in the Legion's history (as the Acklay Platoon-Sergeant, no less!). In his platoon billet he would spend arduous amounts of time working hand-in-hand with CC Lava to the continued improvement and progression of the Airborne detachment. His work would soon pay off, as by September of that same year Verax was transferred to Avalanche’s 1st Platoon in the same position of Platoon Sergeant.

While in 1st Platoon he’d reach the rank of Sergeant, then in November of 2018, faced reassignment to lead in the creation of the Zeta Reservist Company, where fresh cadets enroll to gain experience and work for their blues, eventually leading to a slotted position. He’d spend his time setting the standards for operation throughout the reservist company and incorporate them into the functions of the main companies and detachments within the Legion.

From Acklay to Avalanche, and slotted to reservist, Verax’s track record of relentless work and endeavors would pay off by June of 2019. Following promotions in recognition of his many successes, CS Verax found himself as the Battalion NCOIC and double promoted to the rank of the two blue striped Company Sergeant Major. With a new rank, and an even newer billet, Verax was once again working towards meeting his next benchmark. His work would continue on a prior project, the NCO Academy. Taking input from officers across the unit, Verax would set in stone the standards for NCOs and their procedures on how they operate throughout the Legion. However, he wouldn’t stop there. With years of experience under his belt, and an impressive track record, Verax’s next assignment would incorporate him into the Legion’s first armored detachment, Mynock. As Mynock's NCOIC, his work in assisting the detachment’s development would be crucial to Mynock’s success, helping shape the detachment into what we see now.

With the NCO Academy established, the reservist company churning out new troopers, and Mynock beginning operations, Verax could return to his work as Battalion NCOIC. He would fulfill this mission up until February of 2020, where he’d retire to standby reserves until further notice, fulfilling a new mission in a galaxy far, far away.

Achievement Through The Ranks

How does it feel knowing that you've made it from a CR to a Battalion NCOIC?

"It feels unreal, it was something I never expected to achieve in this unit. At the time I was a Team Leader in Acklay 1-2 Alpha and I had my eyes on the goal and while I was determined to make it there, I had doubts that I could even make it. But the day I achieved the goal, it felt amazing. It helped me shape the belief that with the right mindset and work ethic members of the 501st can achieve their goals. I thank everyone on my journey that helped me get here. BC Jay and BC Bondoer had a major impact on my character and helped me grow in the billet. CC Lava, CX Scuba, CC Player and CC Crisis were instrumental in giving me the advice and guidance I needed to help others in the unit. But one of the biggest people who helped me was CS-M Odin, a true friend and stellar NCO of the legion."

The Old & The New

What were some of the hardships you faced on this road to Battalion NCOIC?

"The biggest hardships along the way was countering the “old guard” mentality. Some of the older members that came before me were stuck in their ways on how the unit should operate versus adapting to the newest generations. It was a struggle and a fight at times, but eventually we persevered with creating new changes for the 501st Legion."

During his time as the Battalion NCOIC, Sergeant Major Verax has made many changes for the unit, with his proudest work being his changes to the NCO Academy. Verax has led the way to bringing standards of how NCOs are trained, promoted, and how they operate within the unit. “It was a long and arduous process I did not do alone.” CS-M Verax credits many people, including CS-M Odin, CC Player, and CC Lava who helped him through this process. Other officers and SNCOs helped as well while Verax focused on the Sergeant-Majors Academy. As Verax puts it, “The evaluation of new platoon sergeants was a crucial aspect I believed required oversight and necessity to the unit.”

Everyone has a war story from their time in the unit and now it's time for the Sergeant Major to tell his:

“One of my best war stories has to be when I was in 1st platoon. It was a campaign operation where we were on a moon-like planet and had to move between mountains to dodge artillery. The operation required the destruction of a facility and the platoon had to move and fight multiple B2s that were emerging from the craters that were filled with black smoke. We were constantly flanked and CM-S Koda’s FST were moving fast to stop the multiple wounds occuring in 1st. In my capacity, I had to shout orders at the platoon to continue pushing forward on an uphill battle and yelled on the radio to get down everytime artillery came in. It reminded me much of a scene from the Roman Empire when the soldiers would hold position and put their shield up from incoming arrows. CS-M Sorensic, at the time when he was Avalanche NCOIC, was with me and we would build trenches quickly and get down while seeing missiles decimate troopers that were not in cover. But with clarity and fast action, I had a method of “popping up and getting down” where we would lead droids to a mountain area, watch the artillery fire on a squad’s position, and squad shields would be put down or trenches to have the missiles destroy everything around them.

Avalanche 1-1 was crucial to destroy the constant barrage of AATs collapsing our positions. After a final push from the mountains, we made it to the facility and I ran with FST and a couple of stragglers to form a fire team after ordering the platoon to retreat to find any trooper that was left behind. We did our best to save as many as we could. After running out of ammo and fighting to the last man, we had no way to make it to the LAATs in time due to enemy reinforcements that included HMPs and special forces. I used an enemy E-Web to cover the medics and I stay’d behind as one of the last men while they ran to the LAATs with the wounded. The LAATs had to hide in the mountains to pick up troops as enemy AA was too strong. Myself, CM Reck and CM-S Koda used enemy weapons to snipe, take down and destroy as much as we could before the nuke went off and we died to ensure that our men made it back alive with the operation being a success.”

Present Day and Legion of Merit

CS-M Verax was recently accepted to become a teacher in South Korea, primarily teaching English to students. He still assists with some of his C-Shop positions, such as TeamSpeak Management, and is engaged as a Clone Military Police in the 501st Legion. He had also been granted the award of Legion of Merit by BC Jay on February 12, 2020, which you can view HERE

December 2020
No events for this month.